At some point, I’ll have posts about games that I’ve played (preferably), or had other people play.  I’m a chicken and don’t watch horror movies so I really can’t bring myself to play the horror games in VR.  And there are MANY.  In fact, I probably buy them all for sheer entertainment purposes when we have friends over.  Anyway….

Before I get to the games and what not, I wanted to let you all know which VR systems I currently have.  I feel there are many more purchases to come with the every changing VR/AR scene.  I must pace myself.

First, I have the HTC Vive which I purchased around June of 2016.  BEST MONEY EVER SPENT.  This includes the computer system I needed to run it.  Towards the beginning of summer this year, I picked up the Oculus Rift when it went on sale.   Both sites have a utility to test your computer systems if you are thinking about jumping into VR.

My preference is the Vive.  First, its room scale capability makes this system far more immersive than the Rift.  The Rift is good too, and I partly picked it up for some Rift exclusive games that looked good.  I’m probably more biased towards the Vive because it was my first purchase.  The reason I purchased the Vive is for the game Paranormal Activity: The Lost Soul.  Thanks to this video, which shows gameplay with the Vive, I was dying to get my hands on it.  I waited on this release for a very long time.  I stalked the PAVR Facebook and Twitter accounts to find out when the release date would be.  The game was that scary in pre-alpha, just think how much better it is in production.  And if you’re wondering, I lasted less than 5 minutes  (including the tutorial) in this game.  Since this game has been out a while, and on multiple platforms, I’m sure you can YouTube a great many gameplay videos and laugh your little heart out.

There are ample sites that review the pros and cons of each, so I won’t rehash that information here.  But I do prefer the Vive for its room scale capability.  I think I will use the Rift more for games that are standing / sit down only ALTHOUGH, it is coming along with roomscale if you get multiple sensors (I only have 2 so far and don’t really want to buy any more).

I’ve downloaded a “Halloween special” that I’m hoping to talk some friends into doing.  If I’m successful, I’ll share the antics with you all.  I’ve pretty much scared all my friends so it might be hard to get volunteers at this stage.  Maybe I’ll try it for myself….. just kidding.

I’ve been a slacker in updating the blog with this recipe…. sorry folks!  This is a very very forgiving recipe so you can’t really mess it up.

RANCH SEASONING (Mix all the ingredients in an airtight container.  You’ll end up with about a cup which is more than you need for this, so save it for next time.)

NOTE:  Usually I make a side of roasted veggies (potatoes, brussel sprouts, and carrots with italian and/or rosemary seasoning) to eat with this.  Mark likes rice so we’ll sometimes have the meat over rice – its pretty tasty!  You can increase the amount of broth without altering the taste of the recipe if you want something with a little more gravy.

*If you substitute for ground turkey or chicken, you’ll do the following:

This is a very forgiving recipe.  I tend to like my soup a little more chunky so I increase the meat and potatoes.  You will need to eyeball it and add more water with bouillon cubes as needed if you get carried away.  On the flip side, if you think you have too much liquid, keep adding potatoes until you’re satisfied.

Tonight I’m hosting dinner for some friends.  We try to get together at least once a month and usually eat out.  I think I’m probably the only one in the group that enjoys cooking and every once in a while (…well this is only the 2nd time…) I convince them to have dinner at my place.

It’s kind of a hodgepodge of food tonight.  Collectively my friends have requested my version of Zuppa Toscana from Olive Garden.  I haven’t mastered Olive Garden’s breadsticks so we will surely be lacking that goodness to sop up the soup.  Also requested is my Mississippi mud roast which has once passed the muster of my super picky friends.  Then there’s rice for the meat, and roasted potatoes (also requested), and a salad.  The friends are on salad duty.

So first up is the Mississippi mud roast which will cook in the slow cooker ALL DAY.  ALLLLLL DAY.  This is a Paleo recipe and it’s one that I make on a fairly regular basis.  It’s also very forgiving IMO and you almost can’t mess it up.  I just eyeball the ingredients and it turns out fantastic.

Forgive the lack of photography skills (and I seem to always lack at least 1 ingredient in the photo)! 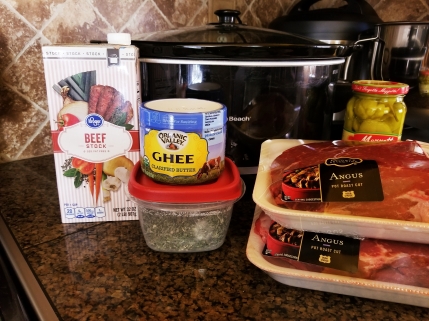 Start with about 5.5lbs of some kind of roast-y meat.  I usually go with round roast but the store didn’t have any so we’re going with a pot roast cut (5.75 lbs to be exact).  Pop the meat in a slow cooker along with about 1 cup of the beef stock, half a jar of the pepperoncini juice (and about 10ish or so peppers…though for this meal because some of my friends are picky, I omit the peppers), 3-4 TBSP of Ghee, 1 TBSP of coconut-aminos (left out of the family photo on accident) and a generous ~1/4 cup of the homemade ranch seasoning.  Set your slow cooker on high and let it go for about 6 hours.  After that, I take out the meat, shred it, put it back, and set the cooker on low until its time to eat.  I will get an actual recipe together that’s much easier to follow than my ramblings.

Main. Course. Done.  We serve this over rice and have a side of roasted veggies (usually potatoes, brussel sprouts, and carrots).

Later today the soup will cook.  This is NOT Paleo in case anyone was wondering.  I try to be on the Paleo wagon but there are some things that I just haven’t worked out a good substitute for.

The Olive Garden version of this soup calls for bacon and sausage.  My significant other (Mark) doesn’t eat pork so I effectively leave out the bacon and substitute ground turkey (with some doctoring) for the sausage.

Doctoring up the ground turkey just requires the addition of 1 tsp garlic powder, 1/8 tsp red pepper flakes, and 3/4 tsp dried fennel seeds per every pound.  I grind the fennel seeds with a mortar before adding to the meat.

You will also need to dice your white onion, have a few teaspoons of minced garlic (the garlic was hiding at picture time), count about 10-12 bouillon cubes, 1 – 2 cups heavy cream, and a bunch of kale.  Oh, and the potatoes – they are kind of the star of the show here.  You can use russet potatoes or Yukon golds.  Whatever floats your boat.

I’ve made this soup so many times I eyeball everything in it too.  I think it’s pretty forgiving though fair warning – don’t put too many red pepper flakes in the soup, you can’t take away the heat.  I prefer the soup more chunky than soupy so I tend to add more meat and potatoes than the recipe calls for.

Remove the meat and drain any fat.  Set aside and refrigerate while you work on the rest of the soup.  Add the diced onion and garlic (and bacon pieces if you choose to use), and saute until the onions are soft and translucent.  Add water, approximately 10 cups, and add the bouillon cubes.  I typically go 1 cube for each cup of water for more flavor.  While you wait for this to come to a boil, you can work on slicing potatoes.  When using russet potatoes in good shape, I tend to leave the skin on.  Your choice – I just don’t like to peel them.

Add the potatoes to the pot and cook until soft.  This takes probably about 30-ish minutes.  When the potatoes are soft, add the cream and cook until heated through.  Then add the meat you set aside earlier and mix it well.  Add the kale just before you serve and viola! Soup is done.

I will add the recipes shortly for easy reference and printability.

Why blog? I thought it would be a good way to share my interests… from food (bite) to Virtual Reality and other things tech (byte).  Odd combination but hey, it’s what I enjoy.

I love to cook…. I discovered this kinda late in life. I don’t love the dishes that come with it so I find myself making large meals that will last a couple of days as lunch and dinner leftovers.  I love to bake, so much so that I’ve made baking a side hustle.  I’d ultimately like to share some favorite recipes, some tools, and some hacks I’ve learned along the way.

Then, the techy in me LOVES virtual reality.  I can’t tell you what I’ve spent on this hobby but I will tell you its the best money spent on entertainment.  Even my significant other commented it to be the best video game ever.  Not that VR is all fun and games, there’s educational value to it, too.  But let’s be real, I like to be entertained and there’s no greater entertainment that scaring the pants off your friends.  I’m surprised they are still friends!

At any rate, welcome to my musings of things food and VR and other things that might strike my interest.  I hope it turns out to be a fun hobby for me and something good for you.